What Is a Dual Diagnosis?

When a person goes to a conventional rehab for addiction recovery, he (or she) may be told that besides his addiction, he also suffers from a mental disorder. So this person receives one diagnosis of drug addiction and a separate diagnosis of a mental disorder. The dilemma arises from the fact that it’s possible that not every addicted person diagnosed with and treated for a separate mental problem actually has one.

How could this happen? Like this. Most people arrive at a conventional rehab center while they are still using drugs. A few come from jail, so they are not high when they arrive, or maybe they have managed to stay off drugs for a little while but know they need intensive help to stay sober. So the majority of these new arrivals at a conventional rehab center are going to go through withdrawal at the facility. Withdrawal itself can create such intense changes in the way a person feels and acts that it would be easy to mistake withdrawal symptoms for mental disorders.

So the question is this: Is it right to treat those symptoms like they are a mental disorder or should the person simply be supported until the drugs leave his system? We’ll take a closer look at the answer.

How Can Withdrawal Simulate a Mental Disorder?

When a person is going through withdrawal, there're many powerful forces he has to struggle with for life.

His body and his mind are both going to be struggling with great pain and despair for days or weeks. With opioids like heroin or hydrocodone, the worst may be over within a week. With methadone or buprenorphine, withdrawal can last much longer—weeks or months.

Just the physical process of withdrawing from some drugs can itself cause symptoms that mimic mental disorders. Alcohol withdrawal symptoms could be mistaken for mania, dementia or schizophrenia. Withdrawal from heavy stimulant use (like cocaine or methamphetamine) could be mistaken for anxiety disorder as paranoia, insomnia and hallucinations may occur.

A person withdrawing from drugs may also manifest depression, anxiety, restlessness, insomnia or excessive sleeping, hopelessness, loss of interest in life, chronic pain, headaches, even a preoccupation with death. All three of the factors above contribute to the incredible burden each person is struggling with at this time.

Let’s look at the emotional burdens that contribute to a person’s mental distress during this time. Most people going to rehab have pretty well trashed their lives and destroyed most or all of their close relationships. They may have lost good jobs or dismantled their careers by this time. They definitely know they have harmed themselves and their loved ones. They could have overdosed multiple times and seen others overdose and still struggle with this trauma. And none of these situations look easy to remedy.

If you take these forces into account, it would be surprising if a person were NOT depressed and anxious about how they were going to get out of this terrible situation.

The physical depletion a person new to recovery suffers can itself cause mental symptoms. A report published on the website of the National Institutes of Health notes that diets without sufficient vitamins, minerals, and omega-3 fatty acids and amino acids can cause mental symptoms and the supplementing of these substances alleviates mental problems. An article on the website www.everydayhealth.com adds vitamin D, magnesium, folate, iron and other substances to the list of nutrients needed for healthy mental functioning.

Of course, a person drinking heavily every day or spending the whole day seeking and using heroin is not adding these supplements to his diet. The result is a catastrophic depletion of vital nutrients which can result in a wide array of alarming symptoms.

How Can You Tell Which Is Which?

In a recent online chat, one participant made a telling comment:

Withdrawals can cause symptoms one normally doesn’t have.

That comment goes right to the heart of the problem with a dual diagnosis. If a person is diagnosed with a secondary mental disorder while he (or she) is in withdrawal, that diagnosis could be based on temporary symptoms resulting from toxicity or nutritional shortages.

If there were some hypothetical way to instantly eliminate physical withdrawal symptoms, and if a person could somehow be well nourished, what mental problems would remain? And then if a person could begin to see hope for his future, what mental issues would remain then? For most people, very few issues would still be seen. For these individuals, it’s possible to proceed through addiction recovery without being medicated for mental disorders that were really just temporary symptoms of withdrawal, toxicity or despair over the mess one has made of his life.

The Narconon System of Support

At Narconon Ojai, each person arriving at our door is started on a generous supply of nutritional supplements. Physical aches, pains, and nausea are eased with specific nutrition and gentle procedures that help calm both the mind and the nervous system. As soon as a person is through a physical withdrawal, he is started on a deep detoxification step that will freshen both his physical condition and his outlook. Each day, he exercises moderately and then spends time going into a sauna and exiting to cool off. He takes a very specific regimen of nutritional supplements and healthy oils and minerals.

The combined effects of just the early steps of this rehab program very often lift the worst of all these symptoms we have discussed. A brighter outlook, reduced cravings and greater hope for a sober future are the usual results of just this first phase of recovery at Narconon Ojai.

At Narconon Ojai, no drugs are ever administered as part of recovery. Learn more about the way this drug-free program can be the lasting answer to addiction that you’ve been
searching for.

Sober for the Rest of My Life.

When I got to Narconon Ojai I was at an all time low. I know with complete certainty that I am going to make it and I’m going to be sober the rest of my life. Thank you for believing in my and pushing me when I wanted to give up.

Do We Want to Become “Cannafornia”?

The signs that California has been inundated with marijuana businesses have been there for years. With legalization we can expect even more impact and need for treatment of those who become addicted. 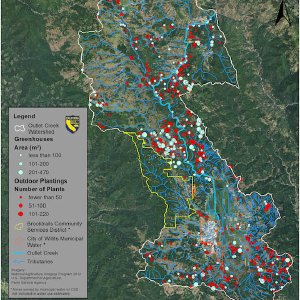